In the article: “Getting Started with Gulp.js – Introduction,” I discussed the absolute basics needed to set up a Gulp.s task.  In that article’s gulpfile.js, we had only one task named “default”. One of the great features of Gulp, is that it will look for a task named “default”, and execute it automatically. This is fine if you have only one task, but as soon as you have two or more, it makes sense to give each one its own name.

When you have one or more named Gulp tasks, you’ll want to execute those tasks from the default task. 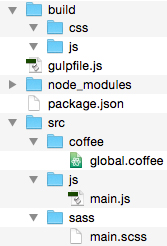 In Example # 1, we have the contents of gruntfile.js. You’ll notice that there are four tasks: default, uglify, sass and coffeescript. The default task is executed automatically. So that task simply executes the other three tasks.

How to Demo the Code Example 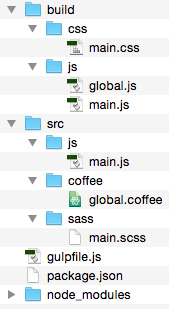 One of the key features of Gulp is the ability to have a default task. This task is always executed by default. In this article, I demonstrated how to execute one or more named Gulp tasks from within the default task. While I chose to uglify JavaScript, compile SASS and compile coffeescript, you can create Gulp tasks for any need you might have. I hope that this article has made it easy for you to understand how to run multiple Gulp tasks.

A while back, I posted an introduction to Grunt, the JavaScript task-runner. I also posted an article about the basics of concatenation and minification with Grunt. Grunt is an excellent tool, and still enjoys a large audience. That said, the most common complaint against Grunt is that its configuration-based syntax can become tedious and cryptic. In this article, I will introduce you to Gulp.js, an excellent streaming JavaScript built tool that has become quite popular in recent years. For this article, I will not discuss the details of installing Node or Gulp. There are plenty of articles available that will provide full details on that. Instead, I will provide a very gentle introduction to Gulp and how to create a simple Grunt task.

Gulp’s success has to a large degree been based on the fact that it provides a powerful alternative to Grunt’s configuration-based approach. Gulp leverages actual JavaScript code in order to accomplish its tasks. With Gulp, you read files into memory, do things to the files, and then output the files from memory to a specified destination folder.

Gulp is a node module. Installation and setup could not be simpler. On a very high-level, the steps needed are:

One of the things that amazed me most when first looking into Gulp was the fact that there are only four APIs. Yep, four. But there is a great deal of power lurking beneath the hood.

Note: The official Gulp documentation states that there are four APIs, but I find it odd that the .pipe method is not counted amongst these.

Where to Get the Example Code

In Example # 1A, we have the contents of package.json. This file tells Node that we need the following modules: gulp, and gulp-concat.

In Figure # 1, we have the folder structure of our first example. Notice that in the SRC/JS folder there are three JavaScript files. These are the files that we will concatenate into one file. The BUILD/JS folder is empty, but that is where the final concatenated file will be written.

Now, before going any further, let’s install the node modules which our code will need. Navigate to the example-1 folder with your terminal application and then execute the following command: npm install

In Figure # 2, you’ll see that we now have a “node_modules” folder. Let’s take a look at gulpfile.js.

This is the file where the Gulp code goes. Gulp does support Coffeescript, so gulpfile.coffee is also a valid file name, but for the sake of simplicity, I will only cover the JavaScript implementation.

In Example # 1B, there are two things happening: First we create to variables, each representing a module that we need. Second, we create a gulp “task”. The gulp.task method takes two arguments: 1) a task name, which is a string, and 2) a callback function, which contains the code that defines the actual task. Here is where Gulp’s real power lies: a gulp task is driven by JavaScript code (i.e. code over configuration).

A Gulp task always returns a file stream. This is to say that gulp will read a file into memory and you want to return that in-memory file object from your task’s callback function. In-between those two tasks, you “pipe” that file to one or more plugins that manipulate the file in some way.

In Example # 1B, we use the gulp.src method to read one or more files into memory. In this case, it is the three JavaScript files in our SRC/JS folder. We then chain the pipe method, passing a call to gulp.dest as an argument. The call to gulp.dest takes a string as its sole argument: the path to our output directory: BUILD/JS.

In order to actually execute our Gulp task, simply type the following in your terminal: gulp

Yep, that’s it! Because our task is named “default”, we do not need to specify a task name. Gulp assumes that we want to run the “default” task, looks for it, and then executes it. Now when you look in the JS/BUILD folder, you should see three files: file-1.js, file-2.js, and file-3.js.

In Figure # 3, you’ll see that there are now three files in the JS/BUILD folder.

You may be wondering why our output is three files, and not one concatenated file. This is because we did not actually concatenate the files inside of our task. In Example # 1, I wanted to demonstrate the basic flow of a Gulp task: using gulp.src to read files into memory, and then using gulp.dest to write those files from memory to disk. Now let’s update our Gulp task so that it actually concatenates the files.

Example # 2 A – Add the Contact Module to Our Gulp Task

In Example # 2 A, we have added a new line to our Gulp task: .pipe(concat(‘scripts-all.js’)). This line takes the in-memory files, pipes them to the concat module (which concatenates them into one file named: “scripts-all.js”), and returns that in-memory file. That’s really it. Now, navigate to the folder: “example-2” in your terminal, and then run Gulp again, so see the output: gulp 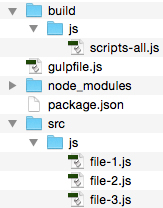 In Figure # 4, you’ll see that instead of three files, there is one file: scripts-all.js.

The fact that there are only four APIs is a testament to the fact that Gulp.js is a simple yet powerful tool for running JavaScript tasks. There is a strong and growing community behind Gulp with thousands of existing plugins. The beauty of Gulp is that since it is code, you can leverage plain old JavaScript to make your gulpfile as powerful and efficient as needed. You are only limited by your imagination. While the examples in this article were very simple, there is a great deal of depth to Gulp and plenty of details / features that you can look into. I hope that this article was a helpful introduction and provided the tools you need to understand Grunt and easily start implementing it in your project.